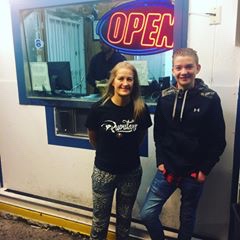 Over the past few years I’ve had some really interesting birthdays. This birthday was a lot more interesting then all the rest. You may have read the border crossing blog, (we had to spend three days in Costa Rica to renew our visas) if you have read it, you may have figured out my………..(what’s the right word?)……………..distaste, for borders. So every time I hear the word “border,” I always imagine a sketchy border town with run-down hotels and a lot of paperwork.

We woke up at five o’clock in the morning (it was still dark outside in Laredo, Texas, a border town). We had stayed the night at a non-profit place for missionaries to stay when entering or leaving Mexico, and before crossing the border, filled up on gas and exchanged money. We exchanged our dollars for pesos at a sketchy little exchange stand. The only way the exchangers make money is by giving you less of what the actual exchange rate is; basically, they rip you off ever so slightly. Meanwhile, all my siblings were sleeping blissfully, while I stayed up and made sure mom didn’t nod off to sleep while driving.

We got to the Rio Grande (pronounced rē-ō grahn-dā) at about six-thirty and we crossed the bridge without a problem. We drove up to a scale for cars and drove on to it so it would weigh our vehicle. I was in the van with Mom, and we got through fine. But dad called us on the walkie-talkie and said that he had been stopped and that the border guards were checking the truck. After a few scary, long minutes he called back and told us he made it through. We were kind of lost, so mom asked directions from a Mexican border worker, which led us to a big, concrete building where we had to get stamps for our passports so we could be legal and we had to get stickers for our car, because we have Missouri license plates. It actually only took an hour to get through immigrations, so we got on the road at about eight a.m.

We still had a ten-hour trip ahead of us, but we were glad that the border stuff was behind us (or so we thought)! After we drove for about half an hour (and got to pay an outrageous fine and/or bribe to a Mexican police officer for speeding), we came up to what looked like a big toll booth that you drive your car through, but this was not for cars to pay tolls, this was a checkpoint so that a bunch of soldiers (equipped with bullet-proof vests and Uzi’s), could thoroughly search your car for weapons and drugs. We definitely had God’s favor because the guy only talked with mom for five minutes and he let both the van and the truck through without any problems. The rest of the ten hour drive was pretty un-eventful except for the fact that dad’s truck lost fifth gear, meaning he couldn’t go more than fifty miles an hour on the Mexican highways.

I forgot to add that we celebrated my fourteenth birthday in a roadside food court. We waited a while to eat, because we were looking for a place with a playground so the kids could unload their energy. We got tired of looking, and decided to stop at the next place we saw. It turned out that it actually had a playground! I actually opened up my presents at the restaurant while a bunch people looked at the “gringos”(it’s what the Mexicans call white people) celebrate a birthday in a food court at a rest stop. We celebrated the rest of my birthday four hours later with a chocolate cake and the biggest candle I’ve ever seen: It was literally a firework. It had a fuse that we lit, and it erupted with a shower of sparks like a fountain firework. Being a missionary has its advantages, and having an unpredictable birthday with a crazy candle on your cake is one of them!